Pizza, chicken nuggets (not tenders), cheese, noodles (with cheese) and the occasional hot dog (all slathered in ketchup)- These are the core of my child’s daily menu. I can get him to eat a few other things, but these are the 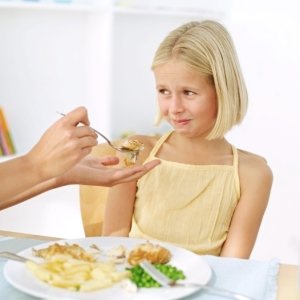 rinse and repeat items on my ‘kids’ menu. When I first became a parent I swore I’d expose him to everything and everything, that I’d never make a separate meal for my kids and that they would always finish their fruits/veggies. That was all fine and well until he hit about 3 ½ years old and he wouldn’t eat. Seeing that I also swore to not let the child go hungry, I began feeding him whatever he would eat to fill his belly. As he got older, his younger brother ate anything I put in front of him however that often consisted of the same monotonous series of food that #1 would actually eat. While an all around good eater, #2 is faring well, but #1 will still dry heave over a strawberry.

We’ve tried reward charts, prizes, offering desserts or special time out with a parent or friend, but alas my child will not change his habits. I’ve tried covering foods in cheese (his absolute favorite food) to try to get him to try it with no change. I’ve put a sliver of a fruit, veggie, or freshly cooked meat on his plate and forced him to eat it. As a result, I’ve cleaned vomit off my kitchen table more than once.

As he approaches 7 years old, I often wonder if there will we will ever reach a breaking point, or a time when he’ll be will to try new things, and specifically embrace some fruits and veggies. Currently, my fridge is stalked with half a dozen types of fruits he could try, but he still refuses despite seeing his best friends mow down an entire freshly cut watermelon. We all have foods we dislike or would prefer not to eat, but to limit your appetite to 12-15 foods makes for slim pickings. He does come from a picky father but I’ve even managed to get dad to choke down some new foods to help promote that positive behavior.

Our pediatrician chastises me yearly now for his poor eating habits and offers all the same recommendations, but at the end of the day I just need to feed my child and keep this family unit on track and moving forward. It’s too easy to dole out advice when you don’t have to deal with the child sobbing at the kitchen table or hear him complain that he’s hungry as he climbs into bed. As of today, I stand by my dedication to keeping his little belly full and his body fueled for whatever the day brings. However, I’m interested to hear some ways that other parents have navigated the waters of a picky eater.

One thought on “Picky Eaters”