If you have kids, I’m going to assume you’ve heard of a little movie called Frozen. Actually, I’m going to assume you know every word to every song, or maybe even every word in the entire movie. I know I do. Both of my children are head over heels in love with everything Frozen, and I find myself just as in love as they are. The Frozen craze has totally taken over in the past few months. I find myself stalking stores and websites for the latest Frozen toys, books, clothes and accessories, and I find myself just as excited as my kids when we find out the Frozen goods have been restocked!

So imagine my excitement when I heard Disney on Ice was devoting their new show to the phenomenon that is Frozen. However, I wasn’t too excited to see the ticket prices. I started bringing my daughter to Disney on Ice when she was two years old. Every time we go, I use a coupon code to buy our tickets. I knew there would be no coupons available for this one. But it makes sense. People will pay full price to see this show, so why not charge it? I was hesitant at first, but I couldn’t pass up the chance. I paid full price.

We always go to the shows at the Dunkin’ Donuts Center in Providence rather than in Boston. I don’t like driving in any city and for me it’s much easier to drive into Providence. Plus, there’s usually at least somewhat less traffic and parking is cheaper. I’ve also found that the tickets themselves are a little cheaper than in Boston, and usually the discount with the coupon codes is a little deeper as well. And, the venue is a bit smaller, so the show feels more intimate and every seat has an amazing view of the show. We’ve sat 6 rows from the ice, and probably 40 rows up, and could see everything throughout the whole show from both spots.

I decided that I wanted to surprise my daughter for this show. I told her we were doing something special, but she didn’t know what. I packed her Elsa dress and crown in a bag, put it in the car while she was at school. When it was time to leave, I told her we were going on an adventure. As we pulled up to the parking garage, she saw a little girl in an Elsa dress and said, “Look Mom! She’s dressed up like Elsa!” So I handed her the bag and asked her to open it up. She pulled out her own Elsa dress and when I told her we were seeing Frozen on Ice, she screamed with delight and exclaimed that it was, and I quote, “The best day ever!”

The show was truly amazing! It was the best Disney on Ice show we have seen, and like I said, they have all been really awesome. All of the others included an ensemble from a few different movies and shows, with one theme that connected them all. It’s a great approach because you get to see a variety of characters and stories. But this show was all about Frozen. They did have some of the most iconic characters (including Mickey, Minnie, Donald, Goofy, all of the princesses and princes, Buzz and Woody, Timon and Pumbaa, and Nemo and Dory) come out at the beginning and the end, which was great. But Anna and Elsa were the main attractions, and the entire audience was thankful for that. 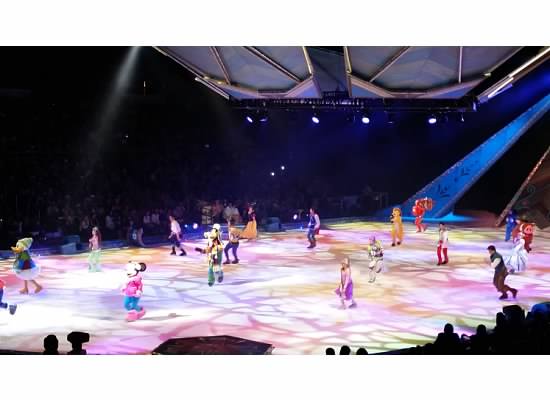 At all of the other shows, each character and story were recognized by the kids in the audience, but none have been as huge and well-known as the Frozen characters, story and songs. It was so cool to see the children’s excitement and to hear every kid in the audience sing all the words to each song. It really was magical. My daughter belted out all of the songs and was on the edge of her seat throughout the show. She said it was the best Disney on Ice show we had seen, and I agreed. 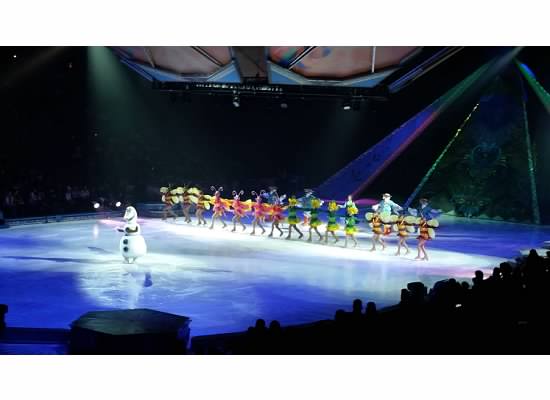 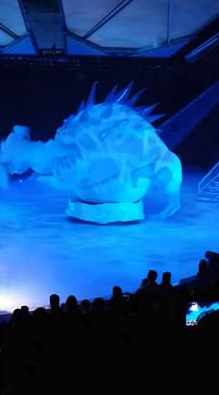 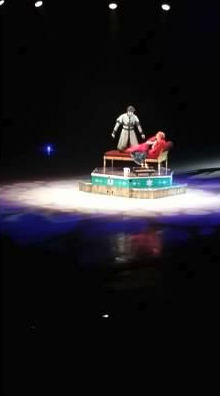 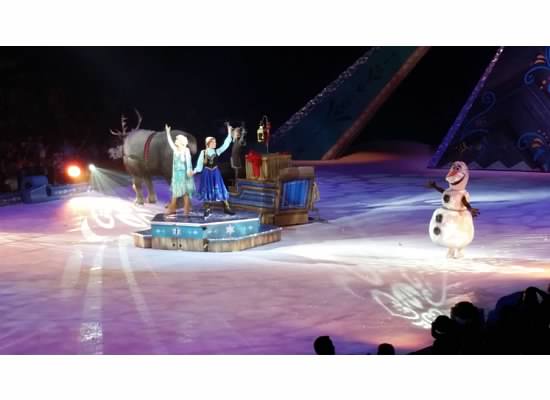 A few things I’ve learned to make the most of your Disney on Ice experience:

Eat lunch or dinner before you go and bring some snacks. You aren’t supposed to bring in food, so don’t bring anything you would be upset about throwing in the trash. But I’ve always brought a few little things in my bag and have never had a problem bringing them in. Food at the shows is very expensive and there aren’t many healthy options. You also may need to stand in line to get food for a very long time, which we all know is no fun with little ones. Of course, there are a ton of fun and tempting items, so I always allow my daughter to pick one treat. I tell her this ahead of time, so there isn’t any confusion (read: tantrums). The choices are usually between cotton candy, a snow cone, and popcorn. She usually chooses a snow cone, which comes in a plastic cup that you can take home and reuse, so the price isn’t too out of control. The cotton candy usually comes with a hat, so the value is somewhat bearable.

They will also have tables with lots of cool light up toys, stuffed animals, and other appealing merchandise. Be warned, these toys are outrageously priced! Stop by Target or Dollar Tree before the show and bring your own light up toys. And, if you are willing to buy something, let your child know ahead of time that they can pick one thing. I think that letting your child know about your expectation ahead of time works…for me it does, anyways. There are also vendors selling goods, walking around the arena before the show and during intermission. Temptation is all around. Don’t say I didn’t warn you! My daughter really wanted the stuffed Elsa doll they were selling at the show. It was a really nice doll, but it was $35. I was able to get out of that one by promising a trip to the Disney Store to see if they had them, which they did, for $20.

All in all, Disney on Ice is awesome family fun! I highly recommend checking out a show. Watch your Valpak mailer for coupons, just don’t expect to find one for the Frozen show – at least not this year.

One thought on “Frozen”