There are few things more irritating than trying to have a conversation with someone and they are more focused on their device than engaging in an actual conversation. 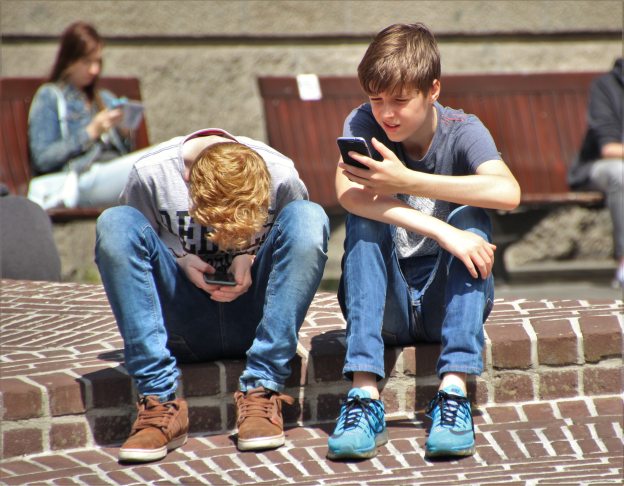 Next time you are in a restaurant, look at the people around you – what are they doing? If there are kids at the table, are the kids on devices?

Just last night my husband and I were able to head out for a nice dinner…..alone…..no kids……a rarity for us. I watched two teenage boys, with their phones up to their faces, walk up the ramp, around a table, and over to their seats. There were adults in front and behind them. They didn’t bump into a thing, which was surprising as their faces didn’t leave their screens. I glanced over at them a little later and they were both mesmerized by whatever was on their screens — not engaging at all in the conversation at the table.

Now don’t get me wrong, I’m not a conversation enthusiast, but come on moms and dads — if our kids can’t engage in small talk with their own families, how do we expect them to do it with other people?

I feel sad for the kids who will grow up thinking this is acceptable behavior.

It is also not acceptable behavior for adults…..but that’s a blog for another time.

My family and I were at Great Wolf Lodge one summer and had dinner in the Lodge restaurant. On the table, they had a placemat with different activities, jokes, coloring, etc. that families could work on together. One of the activity suggestions was to play humdinger (one person hums a song and the others have to guess what it is). We had so much fun playing this game together that day (and still do today).

Here are a few other games you can play with your kids that will keep all of you device free:

Time with our kids is extremely valuable. You don’t have to have the meaning of life conversation with them every chance you can. Sometimes you just have to put the device down and giggle with them or brush up on a few math facts. Such a great way to teach social skills and create a few memories at the same time.