“Mama, you can only call me Captain Hook or Captain America.” 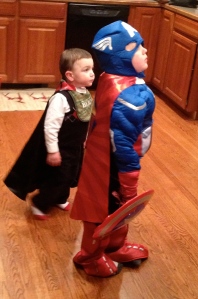 The days that I get to spend with the boys are always eventful. My 4-year-old son Jameson is quite the creative thinker. I loves role-playing and involves family, friends, and anyone else he deems fit. We frequently play  Superheroes, where Jameson stars as Captain America, Jackson as Iron Man, my husband as The Hulk, and I am cast as Wonder Woman.   Hey, I’ll take it – if anyone wants to call me a “wonder,” I’m in! Most of the time the boys are saving the world as my husband and I are attending to other duties, but we are always incorporated into the storyline in some way.  What better way to end a day than to come home from work, fold the laundry, fix dinner and save the world?  Never a dull moment in the O’Neill house! 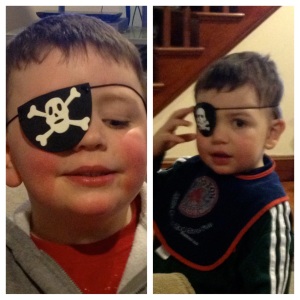 Other characters we’ve been molded into include the cast from Jake and the Neverland Pirates: Jameson as Captain Hook, Jackson as Jake, my husband as Mr. Smee, Meme (my mother) as Bones, and me as Sharkey.  If you’ve spent any time watching this show, you will see why I much prefer Wonder Woman to Sharkey.  Once Jameson has cast you as a character, the role is yours to play, whether you wish to or not.  I’ve been in one room as the boys are playing in another and suddenly hear the shift in his tone as Captain Hook takes over.  “Argh Smee, let’s get those puny pirates.  SHARKEY!!”  And I’m supposed to answer.  I rarely do, as I do not enjoy being called an overweight, unkempt pirate.  But alas, I do not have a choice.  He comes barreling down the hallway barking, “Sharkey, did you hear me?”  And not only must I now join the charade, but I must give it my all or be chastised by a 4-year-old for not doing so.  Jackson, who has been a late bloomer when it comes to acquiring vocabulary, has even begun calling out “Sharkey” when he wants my attention.  While I’m thrilled that he is making the connection to calling for me when he needs/wants me, I’m less than thrilled that it’s “Sharkey” that he’s calling rather than “Mama.” 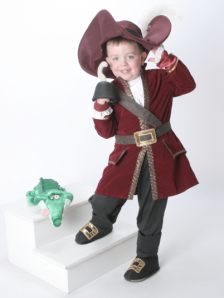 What’s been rather interesting lately however is Jackson has taken to calling Jameson “Hook.”  Not only during times of imaginative play, but all the time.  At night during evening prayers it’s “God Bless Hook.”  In the car it’s “That’s Hook’s seat.”  In the playroom it’s, “That’s Hook’s toy.”  Running around outside it’s “Hook, Hook, wait for me!”  On one hand I find it entertaining, on the other, I wonder if I should be worried.  Do all little brothers call their older siblings villainous crooks?

Another favorite, and rather new, cast we have been arranged in are the roles from Sofia the First: Jameson as King Roland, Jackson as Prince James,  Cousin 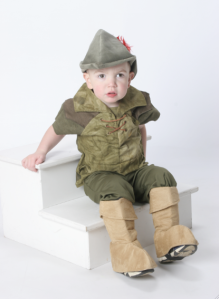 MacKenzie as Princess Amber, Grandpa as Baileywick the Butler (a role he is thrilled to play), Meme as Queen Miranda, my husband as Gnarly the Troll and myself as Sofia.  My poor husband goes from the role of Mr. Smee (Hook’s stunted, portly good-natured right hand man) to a miniature green troll.  He thoroughly enjoys these games.  I, on the other hand, much enjoy being called a Princess rather than a pirate.  One day Jameson actually told me that I needed to go to school to learn how to be a princess because I ‘really didn’t know how.’  I’ll gladly sign up for that school! Anyone else?

Child development experts have said that imaginative role-playing assists children in acquiring skills in abstract thinking, language and communication, self-confidence, empathy, cognitive development, problem-solving and leadership.  Who am I to get in the way of this?  I may not always like the role I am appointed, but how much longer will my boys want to play with us in this way?  My preferred name is Mama, but I’ll answer to whichever name my creative thinking boys call out.

What are some roles that your children have cast you in?

4 thoughts on “Playing With My Boys”