One of the perks of having a husband who flies for the airlines is supposed to be free travel.  Unfortunately, this means flying standby during times that the kids are not in school, which is more challenging than it sounds.  Due to my husband’s frantic work schedule, school, extracurricular schedules, and pre-existing visitation agreements, our family has not taken a trip together.  Ever.  We’ve been married for almost three years and together for four and a half years.  Last year, we were scheduled for a vacation but a family health crisis interrupted those plans.  This year, we were adamant that we were going to make something- anything- happen during February Break!

My younger son, Andrew, has been fascinated by San Francisco for over a year.  Apparently, one of his video games covers a lot about San Francisco.  He has been talking about the Golden Gate Bridge, the Ghirardelli Chocolate Factory, Fisherman’s Wharf (and its arcade), the Cable Cars, and various other sites he wants to visit.  As the youngest, he has been dragged around to his brother’s and cousins’ events for years.  We decided to try and give him the trip he asked for.

After some diligent research, I found a hotel for less than $100 per night for the four of us right near Union Square on Hotelopia.  The Hotel Bijou had a movie theme, so each room was named after a movie made in or about San Francisco and movie-themed pictures hung on the walls.  It even had a small (9-seat) movie theater off the lobby that showed movies at 7 and 9:30 each night.  While it bordered on the seedier Tenderloin district, it was also only a block from the Powell Street Cable Car turnaround, the BART entrance, the bus and trolley lines, and tons of shopping.  We felt completely safe, but we are all frequent travelers (and some of us past residents) to large cities.  People who are not used to seeing homeless people might be more put off by the city in that respect.

We had an early flight, so I woke up the boys at 2:45 am.  Amazingly, both were dressed and ready before I was, and I had gotten up earlier!  My boys are NOT morning people so maybe they were helped by the fact that it was the middle of the night.  After a brief adjustment to our flight plans (which included a taxi from LaGuardia to JFK), we arrived uneventfully in California by early afternoon.

After checking in to the hotel, we immediately headed off to hit some of the highlights.  We purchased a City Pass, which was one of the best decisions we made.  For less than $250, all four of us had unlimited use of public transportation and admission to several of the major tourist attractions. The pass was valid for over a week and we ended up leaving it at the hotel for anyone else who might want it when we left.  Cable Cars are $6 each way, so we practically got our money’s worth just on that. 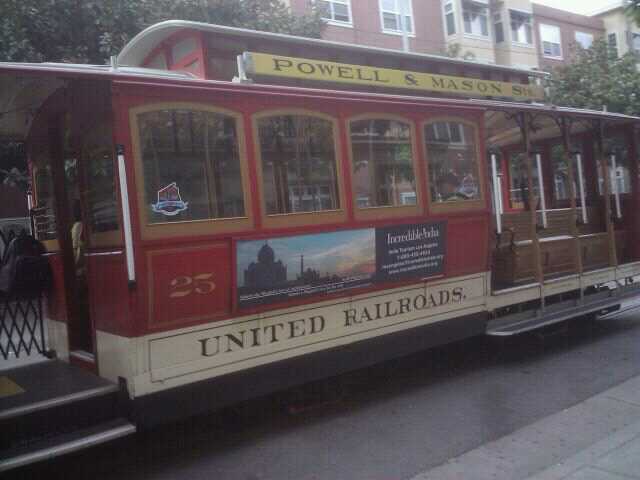 We hopped the Cable Car and rode to Pier 39, a tourist attraction of shopping and restaurants, similar to Faneuil Hall in Boston.  From there, we took an hour-long ferry tour of the Bay.  The boat had both indoor and outdoor space and chugged out under the Golden Gate Bridge, past the famous sea lions and around Alcatraz with a narrated tour pointing out the other sights on the skyline of the city and surrounding areas.  Andrew was jumping up and down with excitement despite the cool and misty weather.  At one point, I was actually concerned he might fall off (I know, a mom moment) and made his brother go stand next to him. 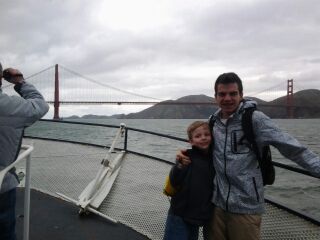 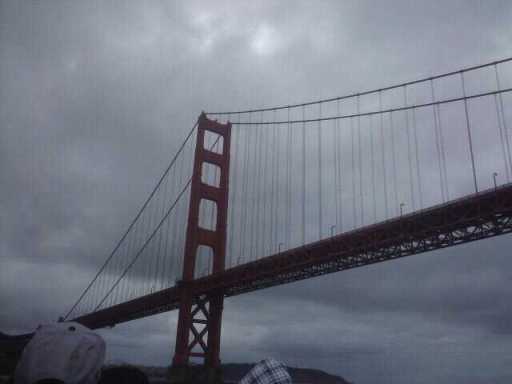 After the ferry ride we stopped to eat, as we were all starving!  The three-hour time difference, early wake up call, and day of travel were starting to take a toll, at least on my husband and I.  We bravely trucked on though to the Musée Mécanique, a private collection of more than 300 items including antique and vintage arcade games, nickelodeons, player pianos, fortune tellers, and animated displays.  Most games cost only $0.25 and the boys had a blast!  With no admission fee, it was fun for me to just look around at some of the antique mechanical animations made from toothpicks.  Crafty people, you have no idea!  By this time, the adults in the our group were fading fast.  We caught the cable car back to the hotel and the kids watched the end of Dr. Dolittle in the hotel’s theater.  My husband was asleep before they got back upstairs.

The next morning, I had scheduled a guided tour of Chinatown with WokWiz. Despite the rainy weather, we spent a couple hours with our guide, Gimmy, and another visitor from Washington, DC learning about the history of San Francisco’s Chinatown, which is home to over 10,000 residents.  Gimmy had grown up there and knew many of the people we came across. He told us the history of the rebuilding after the famous earthquake and fire that destroyed so much of the city in the early 1900s.  He also shared the history of the Japanese-American internment during World War II and how that changed the area when Chinese merchants took over stores that the Japanese-Americans had to forfeit their property.  In addition to seeing typical businesses and restaurants in the area, we toured a fortune cookie company, a tea shop (which included a demonstration of how to correctly brew tea), and a traditional herb shop where a practitioner diagnoses problems and prescribes herbal remedies, which are compounded on the premises.  I never knew there were so many varieties and grades of ginseng until this trip!  My husband’s family is Chinese and he has family who entered the country through the notorious Angel Island in San Francisco, so the trip was educational for all of us.

We also hit the free Cable Car Museum that is just outside the neighborhood.  The tour included a lunch at a local restaurant with several courses of dumplings, egg rolls, chow fun, sesame balls, and probably some other things I’m forgetting.

Well-fortified, we walked to the San Francisco Museum of Modern Art and spent the afternoon wandering around the various exhibits, viewing works by Matisse, Warhol, Picasso, Pollack, and many others.  My older son, Anthony, is my art lover and he managed to wander off on his own during this part.  Andrew became slightly disturbed by some artistic painting and photographs of topless women but he recovered well with a little ice cream.  Returning to the hotel for a little rest was necessary by this point in the day.  San Francisco is hilly and we did a lot of walking to burn off all those vacation treats.

That evening, we took the trolley and bus to the North End for some Italian food and continued the culinary fest with a trip to the Ghirardelli Square- Original Chocolate Manufactory.  While the chocolate factory is no longer there, Ghirardelli has several locations around the original building. We toured a building that houses the original chocolate making machines.  A couple of hot fudge sundaes later, we grabbed the cable car back to the hotel with some souvenir bags full of chocolate in tow.

On our third and last day we took a different route and took the trolley around to the Aquarium, where I got to pet the stingrays and other neat creatures.  Andrew wasn’t having any of the touching part, but did enjoy checking out the octopus exhibit.  My husband hopped a bus to go up to Coit Tower, but was unable to persuade either of the boys to join him.  They wanted to go to Ripley’s Believe or Not, which is exactly the kind of tacky tourist attraction I abhor and my boys love.  So we went and Josh met us afterward.  Our last stop was at the top of Lombard Street, known as the curviest street, for a picture.  By now we were chilly and ready to head home so we picked up our bags from the hotel and took a red-eye flight back to Boston. 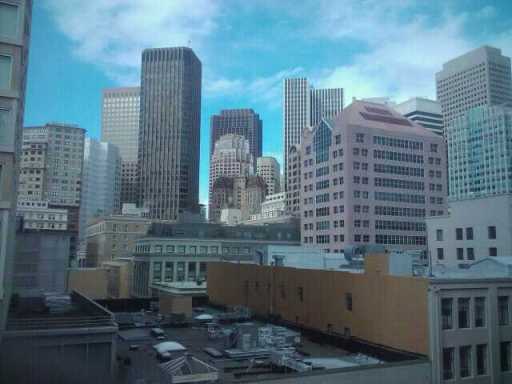 It was a very busy three days but everyone enjoyed the vacation – even my teenager, though he would have been happy to spend it shopping.  It was the first trip to the west coast for both boys and Andrew is already planning a return trip with his dad in the future so he can show him all the cool stuff there.  It can be hard to plan a vacation when your kids are spread out in age like ours (6 years difference) and have varied interests.  This trip worked out well, since San Francisco has something for everyone and the public transportation made it much easier to get around economically.