I remember well the days when I could just turn off the television when something “ugly” came on the news and protect my children from the harsh realities of the world.  This was particularly true during those six years when I just had my oldest.  I could wait until he was in bed to watch things with more adult content and generally had a lot more influence than I realized at the time.

As my younger son came around, that got harder to accomplish.  He joined his older brother and cousins who lived with us.  The older kids were 6-10 years older than he was, which meant when he was 3, I had a 9-year-old boy and two 13-year-old girls living in the house.  While I still exercised parental control over the tv and computer, it’s tough to persuade kids that age that “Sesame Street” is the best entertainment option available to them.  Add video games into the mix and things get more cloudy, but using rating systems and time limits, I still have some influence on the media that comes in the house that is targeted at kids.

What happens though, when the really scary stuff is on the local news, in the paper, and the topic of conversation?  The recent case of Trayvon Martin is just one example that has challenged some of my balanced parenting skills.  Where I used to be able to turn it off, or explain our family’s personal beliefs about racism and have it be accepted with blind faith about the way the world should be, situations like Trayvon Martin’s hit home.

My older son is 15 and a freshman in high school.  It doesn’t always go as smoothly as I would like.  He makes mistakes, as do I.  He, like most 15 year olds, is highly opinionated and quite capable of making his own argument about a situation.  This is both a blessing and curse.  I admire his willingness to take a position and hold to it, to question and challenge authority (when done respectfully) and to hold his ground when necessary.  That said, he is in many ways a typical white, middle-class teen.  We currently live in a predominantly white community where the few minority students in his school seem to be fully accepted.

What separates my son from his peers though is that he has had the experience of living in a more diverse community.  He spent his elementary school years in Mississippi, participating in multiple sports programs.  He took tennis lessons, not at a country club, but at the National Junior Tennis League program in the local park.  His baseball league was firmly integrated and a source of pride in the community.  Because of my work in youth development, he had the experience of often being in the minority at after-school and summer programs.  He grew up with friends, coaches, teachers and caretakers of all races and feels comfortable with both.  That said, he also recognizes the reality of “racial profiling,” even on an informal basis.  He has seen how he can be treated differently than his Black friends when they are in an establishment, how subtleties of racism creep into daily life. 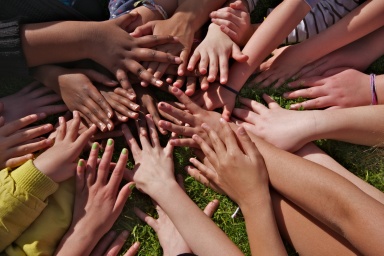 When the Trayvon Martin case came to light, we had several discussions. One was about how people judge you based on appearance…not just skin color…but the clothes you wear.  Whether or not we think it’s ridiculous, it is a fact of life that needs to be considered.  We talked about what it must feel like to be judged based on something you can’t change such as skin color, disability, or where you live.  To him, it is clear about how things should be.  As a mother of a young man, and as someone who has had the joy and sorrow of working with many young black men, seeing some shine and others slip, while witnessing the (usually) internal prejudice that comes from those who might employ or mentor them, it is heartbreaking.  We may not know the exact circumstances of Trayvon Martin’s death.  We may never know.  The fact that a young man, of any race or color, engenders distrust walking through a neighborhood is a larger issue.

My younger son is essentially “color-blind.”  He describes people in these terms “peach” (which is the pasty shade of white that he and I are), “tan”  (which describes both my older son, whose 25% Italian heritage is heavily dominant in his coloring, and my husband, who is Chinese), and “darker tan” (which sometimes comes up when describing someone who is Black).  Race seems to elude him as a concept and is rarely used as a descriptor for someone he meets or knows.  I’d like to think that something I’ve done has made him this way, but I don’t think it is.  I think it’s just his brain.  He adores Michael Jackson and laments the changes he went through in his appearance throughout his life as he thinks he should be proud of how he looked.  Andrew struggles with many social cues including facial expression and I wonder if this factors into his concept of race.

As a parent, I feel it is now my responsibility to make sure that the boys understand where my values are and why.  Not as a doctrine, but as a discussion point.  I was heartened when Anthony included a diverse student population as an important issue for him when he considers colleges, without prompting from me.  I am a big believer that most fear comes from ignorance and racism is mostly a fear of the unknown.  As a parent I try to combat that through various ways.  My kids have gone to festivals of all kinds: Irish, Italian, Portuguese, Chinese, Polish, Cape Verdean, and more.  We listen to all types of music in my house: hip hop, blues, jazz, classical, country, heavy metal, pop and classic rock, with some bluegrass and my favorite Cuban artists mixed in.  I’ve always tried to make sure that their books contain the perspectives and legends of various cultures and faiths.  Mostly though, I try to lead by example.

I wish that everyone saw the world like my younger son.  I hope he always holds on to that mindset.  The most important thing that we can do as parents is to open the door to our children to have these important discussions.  When my children make a statement that does not reflect my values about an issue like race, I start by asking them why they said it.  Often times, it is repeating something they’ve heard and I take the opportunity to challenge the statement, give examples that contradict it, or at the very least explain my position.  Luckily, this has been rare, but also effective.

This time of year is an important one for several faiths as celebrating the example of God’s grace and forgiveness.  Spring has traditionally been seen as the period of renewal, for it is the physical evidence of the earth reborn again that tracks time and progress.  My hope for this spring is to see a turn away from blame and hate in society and a new willingness to civilly discuss concerns, collaboratively solve our collective problems, and that we see the promise in our children…of every color…and support it.