As spring hits and some organized friends talk about the spring cleaning they are about to attack, I sit here looking at piles, boxes, and bags.  A room of clutter.

I know if I open my door, I will enjoy a reprieve of clutter-free space before entering another room of to-do’s yet to be done.   I could get discouraged about the fact that I cannot even begin to imagine seasonal cleaning before I make a dent on purging, but I do not.

Why?  Because I have a plan in place for tackling every area on our home, a vision for how things will look (and I will feel!) once I do and a history that proves the once-unfathomable can come to fruition! 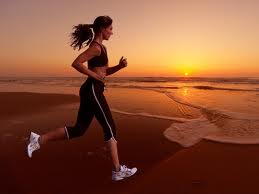 You see, more than a decade ago, when I was living in Japan, a local friend asked me to register for our town’s newly organized triathlon.  She explained that, if I registered, they could call the triathlon an international one and invite prestigious racers from all over the world to come.

I told her that I’d love to help, but that I was a slow runner, had not swum much in years and was useless on a bike.   My friend was one ahead of me though – she’d organized a relay option.  I could choose just one part of the triathlon to participate in and she’d set me up with friends with whom to train and a team to compete with.

How could I refuse?

So it was that I completed the running leg in an international triathlon that year and continued on to enjoy both running and swimming legs in future years.  I also ended up doing some 5k’s, 10k’s and, due to some translation issues with a different running friend of mine, an even longer race one day, which I was in no way prepared for.

That day was a turning point for me.  For after my sore muscles and chafed, sunburn skin healed, the race itself still affected me.  I had not known I was about to run such a long course, and would have never imagined I could.  But somehow I completed, largely with thanks to the strong encouragement of my friend, who chanted in his very limited English, “o-kay, o-kay, my pace, my pace.”

In fact, that friend not only encouraged me to finish the race, but also slowed the race organizers down as they were about to pull up the finish line, so I could enjoy the satisfaction of crossing it.  I may been the last individual to do so, but that did not matter. I had reached the end-goal.

Well, you know what folks say – an end is just a beginning.  After finishing that race, and looking back at the relay portions of the triathlons and other races I had done, a desire to run a marathon was born in me.  So, soon after returning to the United States, I drafted my brother into helping me make my marathon dream a reality.

Using a fabulous book called The Non-Runner’s Marathon Trainer, my brother and I bonded once more as siblings over long weekend runs.  We acted as one another’s cheerleaders and check-ins.  We stood – or rather – ran by one another, mile after mile, until I experienced one of the greatest personal successes of my life:  finishing the Cape Cod Marathon!  (And, because I did so with a commitment to the training outlined in the book, I could walk relatively ache-free in the days afterward.)

Had anyone told me in my early 20’s that I would not only want to run a marathon one day, but would also actually do it, I would have laughed them right out of my presence.  Likewise, had anyone after I had met my marathon goal a decade or so ago that I could not conquer any goal I set out to meet, I would have simply smiled and nodded, dismissing that naysayer’s opinion.  For, after running a marathon, I felt like I could do anything I set my mind and body to.

In-Training for A Clutter-Free Home

Granted, in the years since I crossed the finish line of the Cape Cod Marathon, running has taken a back seat to other life pursuits, and I have not always sustained utmost confidence in my ability to do anything I set my mind to.  In fact, in recent years I have even submitted to a defeatist attitude when it comes to being the homemaker I seek to be.

At “my-pace, my-pace,” I have begun to.  With my husband as a committed partner, a plan we have laid out as our trainer and a vision of victory as a motivator, I am on my way…

I am confident that a less-cluttered home is possible.  Sure, just like when I trained for my marathon, I will need to make time for my goal, sometimes forcing myself to take step after step, even when I feel tired or unmotivated.  As I do, undoubtedly, there will be times when confidence flags and I will need my partner’s encouragement.  Likewise, if I am to reach the finish line in decent condition, I will have to honor my trainer and trust that by following daily steps in the plan, I will meet the final goal with a smile, not inordinate soreness.

Anyone want to join me?  Anyone else have the urge to purge for a more manageable home?  I’d love to know there’s an entire team of us working toward this goal!