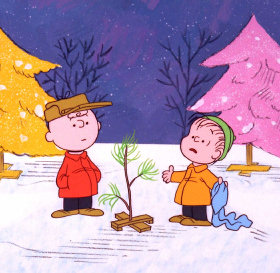 Since I shared some Thanksgiving fun facts with you in my past post, I wanted to share some Christmas fun facts this time around. Christmas is a big deal in our house and I love to be able to spout out all kinds of useless information around this time of the year.

1. The first president to decorate the white house Christmas tree in the United States was Franklin Pierce.

3. The poinsettia plant was brought into the United States from Mexico by Joel Poinsett in the early 1800’s. And Contrary to common belief, poinsettia plants are non-toxic!

4. “Jingle Bells” was first written for Thanksgiving and then became one of the most popular Christmas songs.

5. If you received all of the gifts in the song “The Twelve Days of Christmas,” you would receive 364 gifts.

8. There are approximately 25-30 million Real Christmas Trees sold in the U.S. every year.

9. Rudolph, “the most famous reindeer of all,” was the product of Robert L. May’s imagination in 1939. The copywriter wrote a poem about the reindeer to help lure customers into the Montgomery Ward department store.

10. More than three billion Christmas cards are sent annually in the United States.

11. An average household in America will mail out 28 Christmas cards each year and see 28 cards return in their place.

12. Hallmark introduced its first Christmas cards in 1915, five years after the founding of the company.

13. It is estimated that 400,000 people become sick each year from eating tainted Christmas leftovers.

14. The abbreviation of Xmas for Christmas is not irreligious. The first letter of the word Christ in Greek is chi, which is identical to our X. Xmas was originally an ecclesiastical abbreviation that was used in tables and charts.

15. The tradition of Christmas lights dates back to when Christians were persecuted for saying Mass. A simple candle in the window meant that Mass would be celebrated there that night.

Happy Holidays to everyone!